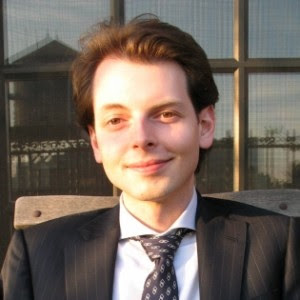 In early 2015 I became enemy number one in social media to the followers of Russian fascist Alexander Dugin after I publicly queried on the Facebook list, The Center for Syncretic Studies, the rather bizarre relationship of one of the chief editors of Arktos, namely John B. Morgan, with the neo-Nazis of the Kievan junta (specifically Svobodha but there is also some suggestion as to the Right Sector as well). Since Arktos is the publisher of Dugin’s The Fourth Political Theory and has been promoting his works, it defied reason why Dugin would be associated with a publishing company where one of its staff would be connected to the very Ukrainian Banderists that Dugin has been denouncing for some time – and for which vitriolic denunciations he had even lost his position at Moscow State University in late 2014. After this public expose, my wife and I were maliciously attacked by nazi James Porrazzo both privately as well as on the Center for Syncretic Studies -- Porrazzo being Dugin’s chief New Resistance operative in the USA -- even though Porrazzo himself had been vitriolically denouncing these same “Banderists” for over a year (see also, this posting).

Now, the publisher Arktos is the leading anglophone alt-right (i.e. Fascist/neo-Nazi) publishing outfit operating today in the West. Arktos (and under one of its other labels, RADIX) has published many of the English translations of Alexander Dugin's works as well as works by Alain de Benoist and others. In the United States, Arktos has recently been taken over by a neo-SUMKA/neo-Pan-Iranist named Jason Reza Jorjani (a half Iranian) who is openly an Islamophobe and regularly calls for the overthrow of the present system in Iran while peddling the most extreme caricatures of Iranian dislocative nationalist discourses (also see). Clear evidence can be found at the following links below: 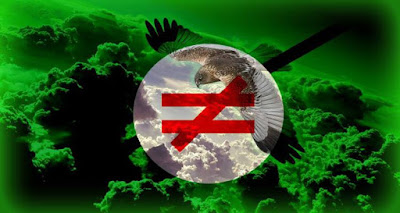 The neo-SUMKA/neo-Pan Iranist emblem often displayed by Jorjani on a few of his online publications. The symbol that looks like the 'not equal' sign on white is supposed to be a rune representing the mythical Simorgh. According to one statement made on the former Iranian.com site (now offline) by an anonymous poster in 2011, the green background of the emblem was specifically adopted in 2009 as a sort of nod to the Langley-Tel Aviv pupeteered "Green movement" which came about during the election fracas of 2009.

That said, SUMKA was the Iranian Nazi party founded in the late 1940s/early 1950s with ties to the Pahlavi royal court which included some eminent royalists as one time members, such as Daryoush Homayoun and apparently even General Fazlollah Zahedi (i.e. the post-coup junta installed Iranian prime minister of 1953-4). SUMKA and the Pan-Iranists were among the organizations which the CIA's Kermit Roosevelt mobilized via the Rashidian brothers against the government of Mohammad Mossadegh in the coup d'etat of August 1953. Often SUMKA and the Pan-Iranists have been treated as separate organizations when recent studies (such as Ali Rahnema's Behind the 1953 Coup in Iran) have demonstrated their memberships to have been the same, and that SUMKA and the Pan-Iranists were essentially two fronts for the same group of Aryanist Pahlavi royalists pursuing the same ends. In Iran today SUMKA and the Pan-Iranist party are banned organizations, but both have been resurrected by some pro-monarchist Aryanists among the Iranian diaspora in the USA and so have become active again. This resurrected neo-SUMKA/neo-Pan Iranist organization is also widely rumored to be funded and controlled by Mosad and the Israeli intelligence establishment. Since the coup of 1953, its ties to the American Central Intelligence Agency are indubitable since SUMKA/Pan-Iranist party were among the specific CIA-funded shock-troops on the streets of Tehran on that fateful day in 19 August 1953. Through its networks and linkages with the so-called North American alt-right as well as Alexander Dugin's own Russian and European-based Eurasianist networks, SUMKA/the Pan-Iranists are now back, active and with the face of Reza Jason Jorjani as spokesman who is the US editor-in-chief for Arktos publishers.

I have maintained for some time that Iran Press TV and other circles in the Islamic Republic of Iran are making a great strategic mistake, and with potentially catastrophic consequences, by associating with various Anglo-European white supremacists and neo-Nazis because these people are opportunists, have no loyalty to Iran or its people, and that they would turn on Iran on a dime. One of the reasons that I decided to forego appearing on Press TV as a pundit anymore (since September 2016) is precisely because the policy continues by Press TV in inviting fascists, crypto-fascists and assorted white supremacist Anglo-American right-wingers to be among its commentariat. While RT's tilt to the far-right since 2014 is understandable, given the nature of the crypto-fascist Putinist regime, Press TV's does not. The ideals of the Islamic Revolution and its founder are diametrically opposed to everything these people are about, and they are merely using Press TV for their own self-serving purposes. Press TV should stop giving these people a platform because they are not Iran's well-wishers.

Be that as it may, Reza Jason Jorjani is clearly a "regime change" advocate whose organizational affiliation is with groups (i.e. SUMKA/Pan-Iranist party) who are widely known to be funded and controlled by the Israeli intelligence establishment. In his close proximity are also Alexander Dugin -- whose own linkage to the Kremlin is not even in dispute anymore -- and an assortment of North American alt-rightists prominent as Trump campaigners, many of whom also maintain their own ties and connections to the  incoming Trump administration. Authorities in the Islamic Republic of Iran need to be vigilant because the wolf dressed up as a sheep is always a wolf and never a sheep.