Why I stopped supporting the Green movement of Iran in 2009 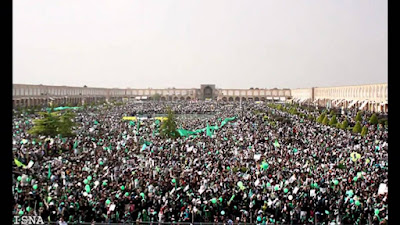 From a Facebook status posting
Let me put something out here for the public record since the Zionist contingency of Duginotopia seems to think they have found something on me. Indeed in 2009 I briefly supported the Iranian Greens. Note at the time I was living on the eastern coast of Australia. This support diminished over the course of three months to outright hostility on my part for a number of reasons, which in summary are as follows:

1) Within days after the vote, the entire online support network for what was going on in Iran at the time became quickly apparent to be coming straight out of Empire's troll factory with shills infiltrating every nook and cranny of social media and cyberspace pushing it. This was also the case in the physical rallies that occurred in every major city throughout the West as well;

3) The appearance of the Baha'is who suddenly threw their full support behind it and began pushing their own agenda and talking points, taking thereby a prominent position among the Green movement outside of Iran -- and apparently inside Iran itself. This factor was also instrumental in my final falling out with Hamid Dabashi who went on from 2009 to 2012 to become a veritable lobbyist for the Baha'is inside the Green movement.

At this point it became apparent to me that the Green movement of Iran was more than just a protest movement against purported voter fraud during the 2009 Iranian presidential elections or authoritarianism. Nor will I ever support any movement or organization which has Baha'is in its ranks as prominent players. Moreover, even though the interior ministry of Ahmadinejad's government acted in a clumsy fashion and called the election prematurely on the basis of exit polls, there was no question that after all the votes were actually counted that Ahmadinejad had in fact won the election of 2009 and Mir-Hossein Mousavi had lost. When all of this was proven to my satisfaction, it was time to throw in the towel on this fake Langley-commandeered and orchestrated movement.

Be that as it may, let me make another thing clear. I have no love for Ahmadinejad or his supporters. Ahmadinejad the man may be a pious and good, simple man. Ahmadinejad the political operator was a disaster for Iran and the world, with his presidency and his divisive politics playing right into the hands of Iran's enemies. Ahmadinejad's quixotic geopolitics also briefly hailed the Arab Spring and applauded the fall of Ghaddafi and the destruction of Libya. Furthermore, I have no love for many of Ahmadinejad's supporters inside Iran itself, as many of these people are extremist fruit-loops -- or corrupt to their fibers -- many of whom also regularly glorify fascism, Hitler and the Third Reich. Let me also underscore for people here how many former cabinet members and staff that left Ahmadinejad's administration in June 2013 walked away as multi-millionaires -- millions they did not possess before the term of Ahmadinejad's government from 2005-2013. In short, Ahmadinejad was Iran's version of Donald Trump, and Iran can do well without him. I believe the Supreme Leader of Iran fully agrees with me here which is why he advised Ahmadinejad not to run for the presidency again in 2017.

Now, stemming from the events of 2009, some paid fink went and committed an ID theft against me in 2009 posting all kinds of garbage on USENET, Reddit and Stormfront attempting to smear my name and make me appear as something that I am not. The ID theft originated on the site Iranian.com which was then crawling with Zionist shills and spooks of every description. On USENET this ID thief posted all kinds of pro-Green nonsense in my name; sometime later on Reddit and Stormfront, all kinds of white supremacist BS were posted. None of these postings were by me. Stormfront finally took down the ID theft postings after I sent them demand letter after demand letter, and finally a DMCA take down notice which did the trick.* Reddit disabled the account associated with the ID theft but refused to delete the posts. With Google I have been in a pitched semi-legal battle of sorts ever since 2009; and even with a 2014 European Court ruling called "The Right to be Forgotten," they still refuse to take the posts down.

These are the facts, and the Zionist contingency of Duginotopia can go and suck on a rotten egg. You ain't got diddly, Abookire and Giron.
---
Comment to the post: Sohel Nadeem Rahman As you know very well brother, I also briefly supported the Greens as did many of my mostly Principlist brothers and sisters actually living and working in the IRI at that time. Our support quickly dissipated for reasons similar to yours. And if memory serves me correctly, so did quite a few of the backbiting Iranian-Americans the Duginist cult closely associates with nowadays. "Where is my vote?" was the most used hashtag by that crowd.

---------- Forwarded message ----------
From: Don Black
I don't think the posts by the user using your name constitutes a DMCA violation. But we've disable the account snd deleted all its posts, since it was obviously not you.