Wikileaks has recently published four cables relating to Seyyed Hossein Nasr which establish Nasr's connections to Henry Kissinger and CIA Director Richard Helms back in 1976. According to one source, these Wikileaks cables deserve closer scrutiny because they prove Nasr is not guilty by association, but because he was an informant. The documents are between former US Secretary of State Henry Kissinger and former US Ambassador to Iran and CIA director Richard Helms. Nasr approaches Kissinger and Helms on behalf of the Shah to target the Iranian intellectual Reza Baraheni. The same year as these correspondences and meetings—1976— SAVAK is exposed for a plot involving the planned assassination of Reza Baraheni and other Iranian intellectuals on US soil.

Here below now are the URLs to the four cables and their screenshots. 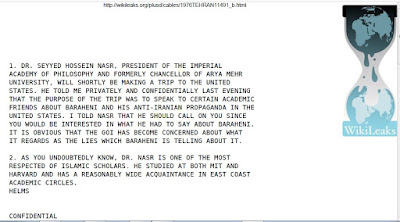 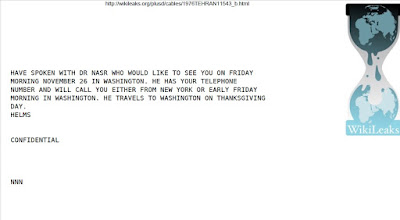 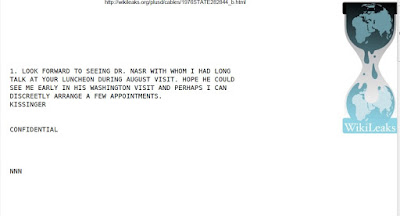