A marriage made in hell: Baha'is, Russia, the Duginists and the Alt-Right 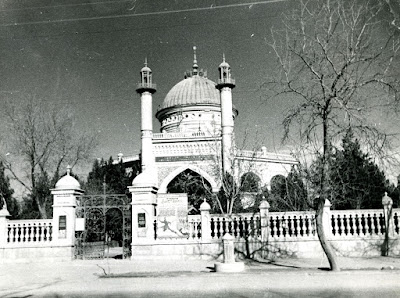 Because of their connection to the Tsarists before 1917, the Baha'i presence in the USSR was under some level of suspicion during the Soviet period. Stalin ordered the seizure of their temple in Ishqabad, Turkmenistan in 1928 but leased it back to them until 1938 when the property was taken over outright by the state. The structure was finally demolished in the 1960s by the Turkmenistan Soviet Socialist Republic authorities, having already been heavily damaged following an earthquake in 1948.

Now, Baha'ism was a proscribed ideology under the USSR, and for good reason too, particularly given its longstanding, deep linkages to the British empire and the Anglo-American establishment in general. This all changed with the Gorbachev period and the end of the Cold War, and from this time forward the Baha'is have been returning to Russia and the former Soviet republics in droves, setting up organizations and missionary activities up and down the former USSR. Although Russia is supposedly an ally of the Islamic Republic of Iran -- this,while the Baha'is remain an archenemy of the current system in Iran (esp. as their world-headquarters is located on Mt Carmel in Haifa occupied Palestine with the evidence of systematic collusion on many levels between the Zionist entity and the Baha'is being quite long and extensive) -- the Russian state has allowed the Baha'is -- and esp. the dominant sect of the Haifan Baha'i (UHJ) organization -- to flourish in Russia without much impediment or any serious questions being asked. Many Protestant missions and New Age groups have apparently been thrown out of Russia in recent years, but not the Baha'is. For those who wish a comparison in order to understand the dynamic, Haifan Baha'ism is to the Islamic Republic of Iran what the Gulen organization and Gulen networks are to Erdogan and Turkey.

Now, the relationship of Baha'ism with the Russians began as early as the 1850s when a step-brother of Baha'ism's prophet-founder, Mirza Husayn Ali Nuri Baha'u'llah (d. 1892), was an employee working for the Russian embassy in Tehran. It was through the devices of this brother that Baha'u'llah briefly found refuge in the Russian embassy in 1852 following the failed assassination attempt on the Iranian sovereign Nasiruddin Shah Qajar (d. 1896) by Baha'u'llah's fellow Babis. While the Baha'is have vigorously denied it, placing the blame instead exclusively on Shaykh 'Azim Turshizi (d. 1852), some Azali Babi sources assert with pretty convincing evidence that the mastermind of the failed assassination attempt on the Iranian Qajar king was none other than Baha'u'llah himself. During this event the Russian embassy became instrumental in brokering Baha'u'llah's reprieve from certain death by the Qajars, even facilitating his exile from Iran following the event, a fact which indicates that the Iranian authorities of the time (like the Azali Babi sources some decades later) also believed that Baha'u'llah had been a mastermind (if not THE central mastermind) of the failed assassination attempt on Nasiruddin Shah's life.

Fast forward to the present. I have been watching very closely for some years now as a developing relationship has bloomed between individual Baha'is on social media (who I believe are quite close to the Baha'i authorities in the US and Israel) with the Duginists. While on the surface this relationship ostensibly does not make any sense, as the articulated values of Baha'ism are diametrically opposed to almost everything Duginism claims to stand for, yet it is nevertheless happening for those watching it unfold. I can name names here, but I will not for the time being. I will leave that for another time. Reciprocally, for their part the Duginists seem to be quite sympathetic to the Baha'is, especially since I am common enemy #1 to them both. Time after time over the past 12-14 months, certain prominent Duginists in social media (some of whom are published on the Katehon) have jumped to the defense of the Baha'is while verbatim repeating their canards. There is also an ongoing relationship between the aforementioned Baha'is in social media and the North American alt-right movement in general. Such atypical anomalies -- which now seem to be standard in this Brave New World ruled by the (il)logic of the inverted and malefic metaphysics of Chaos -- should be noted, esp. by authorities in Iran and also by the Left far and wide worldwide. While people pretend to profess one thing, in the real world often other things appear to be happening from behind the scenes where (just as with Baha'ism's cozy relationship with Zionism and Jewish supremacism) we now have this generation of white supremacist neo-Nazis on friendly terms with them as well.

One explanation for this deepening relationship between the Baha'is, the Russian state, the Duginists and the so-called alt-right is obviously "Israel," since the Zionist entity is a common covert financier and supporter to them all. But there is more going on here than meets the eye. So watch this space, and watch it carefully.