A critique of the Iranian Green movement 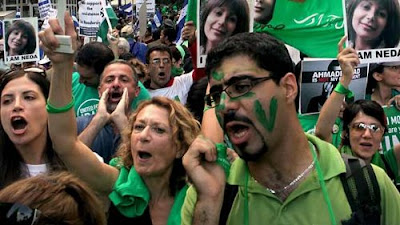 Here is a critique I have of the Iranian Green movement which I do not believe has been articulated before; or, if it has, I am unaware it.

Besides the 2009 post-election fracas, none of the leaders or participants of the Green movement have ever articulated a platform addressing the economic and gaping class disparities in Iran today. Instead they have latched on to the slogans and POV of Western liberalism (i.e. personal freedom, parliamentary democracy, separation of church and state, etc) as the be all and end all of things. I think it is fair to say that since this is the case that one of the fatal flaws of the Iranian Green movement is that is has always been a species of bourgeois reaction by the Westernized and secularized Iranian middle-classes, and not much else. This does not let the sometimes heavy-handed authoritarianism of the Islamic Republic of Iran off the hook. It means that the Greens addressed issues at a level of their own class interests and agendas. Be that as it may, as the Shah's era amply demonstrated, people do not care about slogans of "liberty" and "freedom" if they don't have food in their stomachs or a roof over their heads and when their financial and economic prosperity for the future looks bleak.

One of the internal contradictions of the Islamic Republic of Iran is that it did not seek to address these problems of class and economic disparity in a comprehensive way, although it did claim it wanted to back in 1979. Today under now four years of the Rouhani-Zarif administration -- although this trend was already in process before 2013 -- Iran has become a neoliberal capitalist dystopia with religion, and Islam in particular, as a mere token afterthought. In fact many of the problems of class and economic disparity have been exasperated in Iran since the fall of the Shah rather than gotten better. Blaming things on international sanctions and hostile Western powers alone, while all too true, will only go so far. At some point class and economic disparities will have to be addressed in a systematic and long term, comprehensive way. Unfortunately, neither the Green movement nor the current leaders of the Islamic Republic (nor any of the myriad of opposition groups) seem to have any concrete answers on that front.
Email Post