In defense of the "Red Shaykh" (Karl Marx) الشّيخ الاحمر 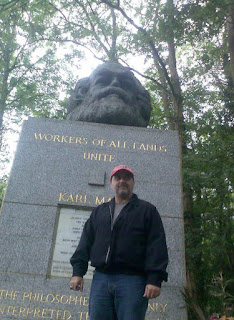 "I am not a Marxist" ~ Karl Marx
Each day I come to FB and SMH at some unsupportable, ignorant view articulated by some person on my feed, people who ought to know better, and mainly people residing in the United States.
Now, anti-socialist and anti-Marxist views have once again gained a mass momentum in social media, becoming normalized, with people disseminating ideas about Karl Marx himself as well as his ideas that have no basis in fact but rather originate in the rightwing sewers of American reactionary movements such as the Birchers, the myriad of North America neo-Nazi movements, rightwing libertarianism, and other forms of idiotic anti-intellectual brain-deadery the United States is well known for.
Now, like Marx himself, I am not a Marxist, although I am very much a socialist. I do not buy into dialectical materialism because I believe it is too circumscribed and narrow a descriptive theory and contextualization of the world which cannot explain everything under the sun. Nevertheless I actually took the trouble to read much of the corpus of Marx's own writings and that of his lifelong collaborator Friedrich Engels, and thereby benefited immensely from their views and analysis in my own political thinking. To this day, no one has written as penetrating an analysis of the flaws of the capitalist system as Karl Marx did in his Das Kapital. This book, or at least its first volume, is as relevant today as it was when it was first written. It is not an easy read. It's theories of political economy cannot be reduced to one liners or short paragraphs. It offers a very complex argument. As such Das Kapital needs to be studied and digested over time, even if one is not thoroughly convinced by everything detailed in it.
That aside, I see otherwise intelligent people in the United States taken in by the rightwing hysteria of the times -- obviously disseminated through social media -- and articulate things in public whose origins are precisely in the reactionary sewers of the white American ethos such as the Birchers, American neo-Nazis and similar. They say they are against the alt-right in one breath but then go on to articulate alt-right drivel with another where Karl Marx, Marxism and similar are concerned. Unbeknownst to them, a lot of this is also resonant with full-blown antisemitism. But I digress...
That said, I am extremely, extremely protective of the Red Shaykh (which is how I affectionately refer to Karl Marx). I don't care much for Lenin, Trotsky or many of the eminent Russian or Chinese communists of the 20th century. Personally, my belief is that Lenin, Trotsky, Stalin and Mao got Karl Marx wrong (but that is a different conversation). Be that as it may, anyone who articulates fictitious rightwing screeds about Marx "not having worked a day in his life" -- perhaps they need to explain this then https://www.marxists.org/archive/marx/works/subject/newspapers/new-york-tribune.htm -- will henceforth (if not already) become the object of my wrath. Also, people who reduce Marx's complex theory of value to one liners without having either read or digested this extremely complex theory, will get virtually slapped by yours truly.
In June 2011 my wife and I went to the grave of Karl Marx at Highgate Cemetery in London and prayed for him -- yes, prayed! we said the fatiha of the Quran for Karl Marx. We were spontaneously joined by two Pakistani Muslim brothers visiting the UK at the time (both Muslims and both Marxists) who joined us. The picture is posted below with one of these Pakistani Muslim Marxists and me with my arms outstretched in prayer. 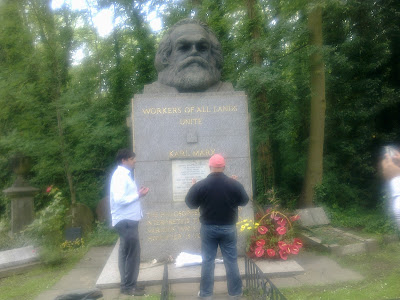