The Historical Zionist Case for Fascism 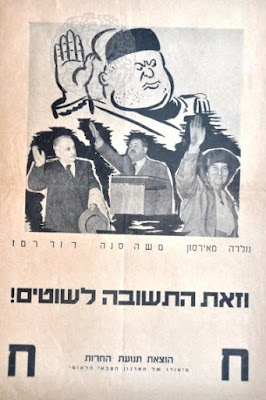 Over the past year, the Israel Lobby especially in the UK has mounted its high horse about the issue of comparing Zionism to Nazism.  Calling any such comparison anti-Semitic, it has accepted as a given that the charge is a fabrication on the order of the Christian blood libel.  Tony Greenstein, myself and others have countered that the comparison is indeed historically factual and accurate (though I’ve also warned that such comparisons must be made carefully, rather than as a bludgeon to equate Israel with Nazism).

Ken Livingstone, who offered a rather provocative version of the claim, got himself suspended from the UK Labour Party as a result.  Similarly, Jackie Walker, a supporter of Jeremy Corbyn who is herself Jewish, was threatened with expulsion for correctly noting that Jews profited from the trans-Atlantic slave trade.  Most recently, Moshe Machover, the founder of the Israeli anti-Zionist Party, Matzpen, found himself expelled from the Party for arguing along the same lines.

Luckily, I don’t belong to any Party that could or would expel me.  It’s one of the reasons that I’m allergic to participating in membership or leadership roles in most organizations (and possibly why they’re averse to having me).

A Jewish studies graduate student earlier today pointed me to a fascinating study of pre-WWII Jabotinsky Zionism and its impact on latter-day Israeli politics.  As most of you will know, Israel’s current extreme-rightist government is an ideological heir of Jabotinsky.  Much of its garrison state militancy, hatred of Arabs, and urge for territorial aggrandizement stems from Jabotinskyean Zionism.  Further, it’s adulation of the powerful strongman leader and its dog-whistle dalliance with outright fascist discourse all harken back to lessons learned from Jabotinsky. 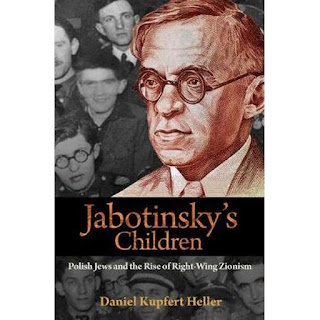 Jabotinsky's Children: Polish Jews and the Rise of Right-Wing Zionism

The book is Jabontinsky’s Children: Polish Jews and the Rise of Right-Wing Zionism

.   My friend pointed me to an eye-opening passage (page 72) which recounts the romance the Zionist Revisionists had with Italy’s Mussolini circa 1928:

“It has to be said fiercely and succinctly: we are fascists, Jewish fascists.”  With these words, D. Stabiecki, a Revisionist living in Rome appealed to Polish Jews…to adopt the politics of Mussolini’s Italy…
The chief mission of the Revisionist movement, he argued, was to give birth to the fascist Jew.  This new Jew would “glorify physical strength” and strive toward “the will to power”–the notion that, as Nietzsche put it, “life itself is essentially a process of appropriating, injuring, overpowering the alien and the weaker…”
The fascist Jew’s code of ethics would follow a simple formula: “[E]verything that serves the building of the Jewish state is good.  Everything that damages the construction of the Jewish state is bad…”  He argued the new fascist Jew would wage war against socialists and communists on the “Jewish street” and be “prepared to use all means to stop them, not excluding physical force.”  He would proudly declare that the “democratic-liberal idea is not holy to us.  If the realization of democratic thinking can lead to destroying the ideal of the Jewish state, we can also be anti-democratic.”

While it’s important to note that this romance between Zionist and European fascism flourished in the period before World War II, before news broke of the Holocaust and the Nazi extermination of much of European Jewry; it’s also worth keeping in mind that the Revisionists, in their effort to end British colonial rule, conducted serious negotiations with the Nazis well into the War itself.  They even contemplated a Jewish state underpinned by much of the same ideology as the Nazis themselves.

Nor were the Revisionists the only Zionist party flirting with European fascism: Ben Gurion’s Labor movement signed the Haavara Agreement which facilitated the plundering of the wealth of German Jews by transferring it to Palestine in return for the purchase of military matériel for the Nazi war machine.  Haavara also served a double benefit because it peeled away Diaspora Zionists from the international campaign led by American Jewry to boycott Nazi Germany.

Despite his fierce enmity toward the Revisionists, Ben Gurion’s views mirrored those of the Revisionists in some key ways.  He too hated the Arabs and laid the groundwork for the later expulsion of over half the native Israeli Palestinian population in the Nakba.  He too held cold-blooded views which declared the primacy of the state over all other Jewish values.  The founder of the Israeli state harbored Messianic vision for himself as leader and for the state itself as a force for the ultimate historical redemption of the Jewish people.

This toxic romance with fascist ideals on both the Zionist left and right has led us to where we are now.  It has led to an Israeli state which worships power and military might.  A state which finds moral values and international law not just expendable, but inimical to the national interest.  A state which upholds the supremacy of Jews over non-Jewish citizens.

The idea that Zionism has had a long historical flirtation with fascism that informs Israel today, is an idea that should not be controversial.  The fact that is is in some circles illustrates how ahistorical the Israel Lobby and its adherents are.
Email Post