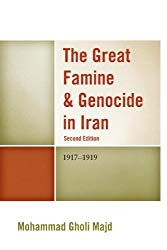 What follows is the account of an eminent Persian Bahá’í, Mírzá Áqá Khán Qá’im-Maqámí—the great-grandson of Mírzá Abuʼl-Qásim Qáʼim-Maqám Faráhání, the prime minister under Muhammad Shah and the man lauded by Bahá’u’lláh Himself as "the Prince of the City of Statesmanship and Literary Accomplishment" (Tablets of Bahá’u’lláh, p. 65)—who used his immense wealth to keep all the Bahá’ís of Persia well-fed as a devastating famine ravaged the country. The anecdote is derived from a larger biographical sketch of Mírzá Áqá Khán Qá’im-Maqámí by the late Hasan Noushabadi, who wrote up his remembrances and published them as an article entitled Rajul-i-Rashíd ("The Man of Courage") in the Persian-language Áhang-i-Badíʻ ("New Melody") magazine, which I have been working to translate for some time.
I hope you enjoy this inspiring story.

It was towards the beginning of autumn in 1916 when I [Hasan Noushabadi] myself left Arák for Ṭihrán. Qá’im-Maqámí said to me:

"The coming winter will bring dire scarcity and famine. The Baháʼís must be made aware of this fact, and urged to prepare, to the greatest extent possible, wintertime provisions and victuals for themselves and their families. In assemblies and gatherings, advise the Baháʼís openly and privately even to sell their furniture, and to buy and hold on to wheat, barley, sangak bread, lima beans, and maize."
He also said:

"ʻAbduʼl-Bahá appeared to me in a dream and stated, 'Scarcity and famine are in store this year. Woe betide the wealthy among the Baháʼís if even one of their impoverished brethren should starve to death!'"

Owing to Qá’im-Maqámí’s persistence and insistence—as well as this poor servant’s efforts to share the aforementioned anecdote with others and urgently exhort them to act accordingly, believing as I did in the significance of Qá’im-Maqámí’s dreams and remarks—the Baháʼís were eventually persuaded to prepare their wintertime provisions by whatever means necessary, even if it meant selling their rugs and other furnishings. In addition, those who had been charged with spiritual affairs began to gather resources that would aid the poor during the winter. To that end, these individuals solicited funds from every one of the most eminently wealthy Baháʼís, and successfully secured written commitments from them to donate large sums of money. Ultimately, a record of all these commitments was given to Qá’im-Maqámí; he calculated the total sum of these donations, and committed to match that amount from his own funds. With all this money, Qá’im-Maqámí purchased an ample supply of food in the name of the poor, and kept it in storage. Furthermore, he appointed a special committee that would visit the homes of every Baháʼí in Ṭihrán, determine the number of people in each family, and make a note of their income and expenses. Those who could not make ends meet, or did not have a cent to their name, did not escape the vigilant attention of Qá’im-Maqámí; every one of those needy souls received rations. Indeed, from the first sign of privation and paucity until the following spring, Qá’im-Maqámí saw to it that provisions were regularly given to every family that needed them. Even on the eve of the Persian New Year, he prepared rice cooked with shortening—so much so that there was plenty to go around—and he offered it to everyone so they could have a proper meal and remain in high spirits.

In brief, Qá’im-Maqámí did not allow even one Baháʼí to go hungry or live in dire straits—and this at a time when so many other people starved to death. Those poor souls would go to the slaughterhouse, drink whatever blood they could find, and ultimately die. Others would repair to the wilderness and eat grass—and there, too, would they perish. It was even heard that some of these people would kill and eat their own children, and also those of others. And yet, as far as the impoverished Baháʼís were concerned, not one of them starved to death.

It can truly be said that all these blessings allotted to the Baháʼís, poor and rich alike—inasmuch as the poor were rescued from hunger, and the rich were made the recipients of God’s grace and guidance—stemmed from the prudence, the purity of heart, the effectual measures, and the generosity of this noble man.

Note : This is a copy-paste from a Baha'i Facebook page.