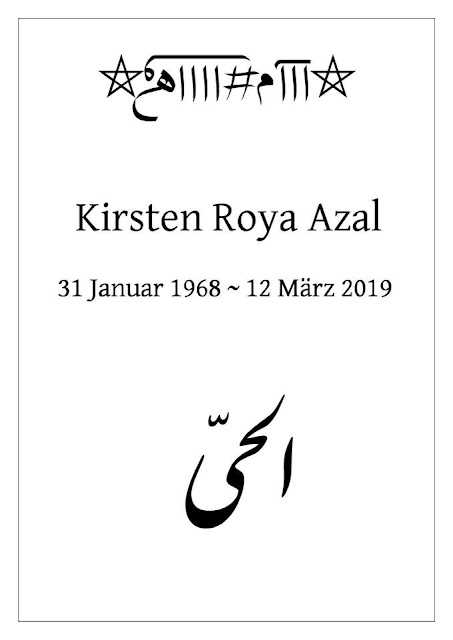 786
For those who wish to make a contribution for Roya's stone, I have set up an ad hoc German PayPal account. For details, please message me privately on Facebook or email. I have also set up a Facebook fundraiser, for those who wish to contribute via that route. This graphic will be the likely design upon the stone.

Now, I want to be as transparent as possible in this fundraising. So here is laying all cards on the table. Among the reasons I am fundraising for Roya's gravestone are the following:

1. Funeral's are expensive here in Germany although not as expensive as they are in Australia. But even with partial state funding, the overall funeral costs so far have put me and Nuri in a deep financial hole into the forseable future, and we haven't even put in a stone yet. I have not only had to pay costs for a funeral home (called a 'Burial Institute' here, Bestattungsinstitut) but also costs for transportation between hospital facilities before the funeral home even got involved.

2. The cemetery like all cemeteries in Germany is part of a guild. Guilds no longer exist in most of the West but they still do in Germany. This means that the cemetery has an exclusive pool of stone masons it works with (and probably has worked with for a couple of hundred years) and no other. As such the cemetery will not allow anyone to acquire a stone from elsewhere or to have the stone inscribed by anyone else but its own pre-approved circle of stone masons, which in this particular case is only two stone mason businesses in this area. All of this has firmly convinced me that everything Max Weber analyzed and stated in his The Protestant Ethic and the Spirit of Capitalism is 100% Gospel truth. People want to blame the Jews for concocting modern capitalism. Sorry, try the offspring of Luther and Calvin instead. The cemetery we have buried Roya in (which is only a few blocks away from us) is, as the name indicates, a Protestant cemetery (and specifically Lutheran, i.e. Evangelischen Friedhöfe-Himmelfahrt).

3. Per above, that means that all quotes we have been given on costs for the stone have come from the two stone mason businesses in question, and these have been from 3000 to 5000 euros on up. I am cutting as many corners as possible to minimize costs, but these costs appear to be standard, which means a gravestone here costs far more than an actual funeral.