A tale about the Unity of Being (wahdat al-wujud) 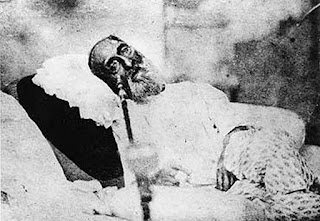 Once upon a time a wandering dervish came upon a grove owned by an elderly, retired man in the twilight of his years. The elderly man had spent years tending to his garden with much love and care, growing in it all kinds of sumptuous fruits and vegetables. Recently having been graced with a realization of the Unity of Being (wahdat al-wujud), the dervish thought to himself, "I am hungry, and there is no blame if I jump over this man's fence and help myself to the fruits of his garden since all is God!"

So the dervish proceeded to jump over the old man’s fence and, without asking his permission, began to greedily help himself to the fruits and vegetables of the old man's garden.

After a while the old man saw what the dervish was doing and so began to yell at him from across the way: "hey you, what are you doing? Why are you eating from the fruits of my garden without my permission?" The dervish responded, "this is God's garden, these are God's fruits and I am God eating God!" The old man angrily retorted, "is that right?" The dervish imperiously responded, "yes, that's right!"

So the old man proceeded over to the other side of his house to fetch his big, heavy walking stick. He returned straight back over to the dervish and began to now beat him mercilessly! The dervish cried, "what is wrong with you, old man? Why are you beating me like this?" The old man responded, "well, this is God's garden, these are God's fruits and I am God beating God!"