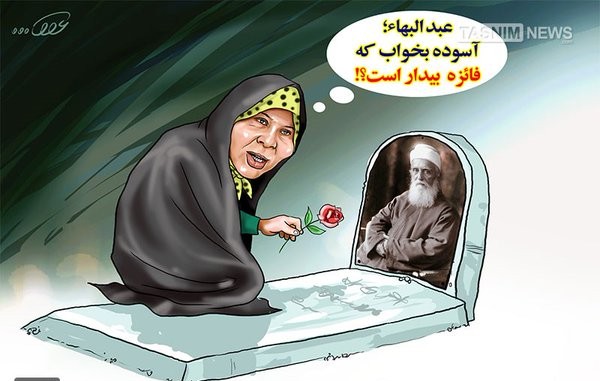 Watched this interview (below) with Faezeh Hashemi-Rafsanjani last night to the end, and I must say this woman is all over the place. She may have a few good points but overall if she is representative of the thinking of the reformists in the Islamic Republic then they are in trouble. Let me underscore one sticking point for me.

At 5:20 (and later) she examples Bahaism explicitly (among others) as a legitimate creed that should be allowed to operate in Iran unimpeded. Her argument rests on Western human rights and liberal democratic arguments where laws and constitutions do not discriminate based on people's chosen creeds or ideologies such that an "Us & Them mentality/reality" (as she calls it) is avoided (as opposed to Iran where, she argues, this exists). This is all very well and good. But there is a fundamental problem in this approach by Hashemi-Rafsanjani where Bahaism itself specifically is concerned.

Contrary to the principles she articulates, Baha'ism does indeed quite sharply discriminate people(s), groups and individuals precisely on the very same bases that Faezeh is complaining about the Islamic Republic. Bahaism discriminates Muslims (and Christians, Jews and Zoroastrians etc) on the basis that in Baha'ism's estimation 1. Islam is (as well as the other traditions mentioned are) abrogated; 2. it discriminates its own schismatics and/or dissidents as "covenant breakers" who should be shunned, ostracized and socially disenfranchised/disempowered; 3. and per the words of its founder, it consigns to hell anyone who criticizes it. One of Baha'ism's own enshrined beliefs is that Baha'is should eventually take over governments (and per the kitab-i-aqdas ultimately the world itself). Under its own ideology, the above three categories of people are effectively considered socially disposal (to use Henry Giroux's term) under a Baha'i state in the exact same manner as Jews were seen under the Nuremberg laws of the Third Reich.

So, the question is this: how do you frame a social contract of non-discrimination and human rights that includes organizations, individuals and groups in it whose own enshrined scriptural ideology is to discriminate against anyone who does not agree with its ideology and political authority? Groups such as the Baha'is are also seeking outright political power in their own right with the creation of a Baha'i theocratic state that will automatically seek to disenfranchise the very people that today are advocating for their rights such as Faezeh Hashemi-Rafsanjani. This is the dangerous paradox that many of these Iranian HR advocates like Faezeh Hashemi-Rafsanjani are caught in when they champion Baha'is and Bahaism under the umbrella of HR discourses.

In the post-WWII era, the German state under its basic law and constitution made any/all forms of national socialist ideology and activities illegal. None of these liberal democrats and HR champions will ever say that this constitutes an HR violation by the post-WWII German state. In principle, the same issue applies here where Bahaism is concerned vis-a-vis Iran. Yet Faezeh Hashemi-Rafsanjani does not see it.

Bottom line, whatever they say and pretend the Haifan Baha'is especially do not believe in any concept of human rights that is remotely recognizable to any liberal democratic pluralist. Their own history is drenched in the blood of their own schismatics and critics, such as the Azali Babis (Bayanis). They seek outright political power and the creation of a totalitarian Baha'i theocratic order that far surpasses in its potential anything Faezeh Hashemi-Rafsanjani complains about the Islamic Republic of Iran: a totalitarian Baha'i theocratic order that upon taking power would seek to shun, ostracize, disempower and disenfranchise all dissidents, schismatics, critics and eventually those of other faiths as well.