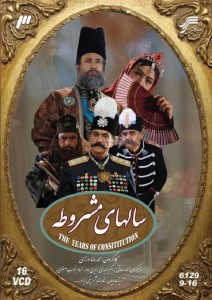 So on the recommendation of my friend Keyvan Yahya'i, over the course of four days I watched all 21 episodes of the series "The Years of the Constitutional Revolution" (سريال سالهاى مشروطه) which aired in Iran only a few years ago. The historical inaccuraces and biases are quite blatant in it, but the entertainment value for a production based on historical events is one of the best. A glaring historical inaccuracy is how the Parsi British secret service agent Manakji Limji Hataria is held to have lived and operated in Iran from the beginning of the reign of Nasiruddin Shah in 1848 all the way to the end of the series when Sattar Khan and his men were disarmed by force at Atabek park in Tehran in April 1910. Manakji died in 1890 (before even the Tobacco Revolt) and was replaced in his role for Iran shortly thereafter by Sir Ardeshir Reporter (d. 1933) who is arguably the real historical mastermind behind many of the scenes in this series attributed to Manakji.
This series also depicted both the Bab and Baha'ullah (obviously not in a good light, especially in episodes 1 to 7). The execution of Amir Kabir was more accurately depicted in this series than the more famous one in the 1970s production Sultan-i-Saheb Qaran as was the assassination of Nasiruddin Shah in 1896 and the public execution of Sheikh Fazlollah Nuri in July 1909. The depiction of Muzzaffaruddin Shah (d. 1906) as a senile buffoon (with his Azari accent exagerrated) was hysterically funny as was his son Muhammad-Ali Shah. However, many liberties were taken in telling the story of Mirza Ali Asghar Khan Amin al-Soltan, Atabek-e-A'zam (d. 1907). The circumstances of his assassination in front of the Iranian Majlis were however accurate.


The entire thrust of this series was themed around the Iranian Constitutional Revolution being a British-Zionist-Masonic plot against Iran, a completely ahistorical yet prevalent view in the IRI. While hidden hands certainly were interfering in the period, the genesis of the Iranian Constitutional Revolution had more legitimate grassroots reasons essentially having to do with Qajar absolutism, their corruption and abuses that finally reached a boiling point first in 1892 with the Tobacco Rebellion then in 1896 with the assassination of Nasiruddin Shah and finally in 1905 with the formal launch of the Constitutional movement that forced Muzzaffaruddin Shah to grant a constitution in 1906 just before he died. Rather than being a British-Zionist-Masonic plot, the Constitutional Revolution's immediate trigger point was actually the Azali Babi community who agitated for decades since the 1850s to take down the Qajar dynasty. Contrary to what is depicted in this series, the assassin of Nasiruddin Shah, Mirza Reza Kirmani, was not so much a disciple of Siyyid Jamaluddin Asadabadi/al-Afghani but an Azali Babi who (together with Mirza Agha Khan Kirmani, Shaykh Ahmad Ruhi and other Azali Babis) worked closely with Siyyid Jamaluddin Asadabadi/al-Afghani in order to destabilize and undermine the Qajar monarchy.
While there was so much wrong with the historical accuracy of this series that one can nitpick forever, nevertheless I thoroughly enjoyed watching it just as I enjoy most historical dramas like this one which Iranian film and television has done a decent job producing in recent years.