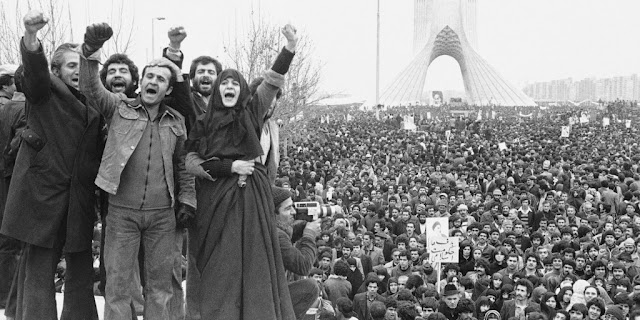 My regards to all those celebrating the 40th anniversary of the Iranian Islamic Revolution of 1979. The Press TV punditry I was once a member of (whose biggest pool are non-Iranian Westerners) are currently engaging in the annual, uncritical spin over the events. So as the Age of Truth begins to dawn upon us more and more, allow me some criticism of the legacy of the Islamic Revolution of Iran in its 40th year:

1) The main socio-economic goals of the Islamic Revolution as enunciated by the Ayatollah Ruhollah Khomeini (ra) in his frist speech at Beheshte Zahra have yet to be realized.
-- Ayatollah Khomeini promised collectivized public utilities such as gas, water, oil, transportation and education, etc, when he first returned to Iran from Paris. Not only is the Islamic Republic of Iran not anywhere near it, it appears that the system has all but given up on even attempting to reach it.
2) Whereas much of the political elite of the former Pahlavi regime were run out of Iran or faced prison or the gallows, by and large the system left the economic mafia of the former system untouched -- an economic mafia that has subsequently thrived and recruited new members into its ranks. This situation has come back to seriously haunt the Islamic Republic of Iran because this reality has been responsible for creating two parallel societies while simultaneously undermining the principles of the system itself in a slow process of attrition whereby the economic mafia have become the social termites to the wood and fabric of that society and its system from top to bottom. This unelected and unappointed economic mafia has also infiltrated every nook and cranny of the system itself and literally bought whoever it could within it, and all the way into the office of Ayatollah Khamenei himself (i.e. his office and not himself).
3) Following from above, today in Iran we are witnessing a worse class and socio-economic disparity problem than at any time under the Pahlavis -- and, let us not forget, the disparities between the haves and have nots is what actually triggered the 1979 Revolution in the first place. Western sanctions and imperialist economic warfare on Iran since 1979 has indeed played its part. However, the imperial economic warfare has been reponsible for the scarcity and economic imbalance but not the actual gaping chasm between the haves and have nots. The system has a responsibility to stop the hoarding of the obscene wealth we see among some sectors in Iran today and instead to redistribute wealth, and not allow it to concentrate in fewer and fewer hands. In other words, the Islamic Republic of Iran is actually moving in the opposite direction to what the Ayatollah Khomeini promised at Beheshte Zahra in that this was to be the Revolution of the Mustadafin fi'l-Ard (the Wretched of the Earth/the Dispossessed of the Earth).
4) Fractional reserve banking was quietly introduced into Iran under the watch of Mohammad Khatami during the 1990s. This saw, first, the semi-privatization of the Iranian Central Bank (bank-e-markazi) and then later the literal mushrooming of private banking, lending and loan sharking which collects interest (i.e. ribāʾ), and all over Iran. This in turn has elevated a new class of economic parasites.

5) This means that contrary to the rhetoric, Iranian society today is not only not an Islamic society. Rather it inhabits a space between feudalism and an unchecked Western-style neoliberal capitalism which the system seems impotent to even attempt to stop.
6) The environmental degradation in rural Iran today as a consequence of misguided policies first brought in under Hashemi Rafsanjani's presidency (or, rather, started by the Shah and then augmented by Rafsanjani) have turned large swathes of formerly (agriculturally) fertile rural Iran into literal desert wastelands that has impoverished entire areas that never witnessed such poverty: areas formerly known as Iran's agricultural bread basket. The documentary film *Maadar-Koshi* covers this catastrophe in detail. This situation of environmental armageddon in Iran's rural bread basket has literally destroyed local economies and as a result made Iran more and more dependent on international markets and global economic actors, i.e. Neoliberalism. This reality is precisely the very thing the Ayatollah Khomeini accused the Shah and his cronies of doing to Iran in his speech at Beheshte Zahra in February 1979. This also means that Hashemi Rafsanjani and his support base were/are agents of Western Neoliberal capitalism in Iran. But the problem is that no one has done anything (or even dared ) to stop the malevolent influence of this parasite and the grinding social engineering of those forces pushing it; this, while rural Iran continues to languish and suffer. Example: Lake Urumiyah has dried up, folks. This is nothing to celebrate or wave flags about.
7) Corruption, corruption, corruption and more corruption.

Time to return to the original values of what people went into the streets for during 1978 and 1979 in the first place. Anything less, and indeed the Islamic Republic of Iran and its 1979 Revolution will eventually unravel and in far more dramatic fashion than how the Shah's regime unravelled. This is certain Truth as sure as the Sun rises in the firmaments each day.